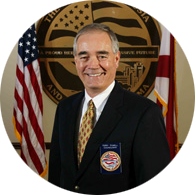 Terry Powell is serving his fifth consecutive term as councilman for District 5, and is the only person to have been elected to five consecutive council terms. He is in his fourth term as Mayor Pro Tempore. He is retired from Shaw Industries where he was the financial manager. A native of Hazlehurst, Georgia, Terry moved his family to Andalusia in the fall of 1986. He is married to Suzanne M. Powell and they have two children; Kyle, married to the former Ashley Krudop of Andalusia, and Katelyn, married to Cory Ellis of Opp. Terry and Suzanne have six grandchildren; Francie Powell, Foster Powell, Addie Powell, Reid Ellis, Georgia Ellis and Thomas Ellis.

Terry is a graduate of Jeff Davis High School in Hazlehurst, Georgia. After serving his country in Vietnam, he attended Valdosta State University and graduated with a degree in accounting.

Terry's hobbies include fishing, golf, and ministering to people in the community. But most of all, he and Suzanne enjoy spending time with their children and grandchildren.