Pictured in the upper left corner of the mural is the fourth courthouse. It was completed in 1897 and was located in the center of what was later converted into a "square," where traffic would flow the perimeter. Lee Olive Gantt and her friend are pictured in the buggy in front of the courthouse.

Pictured on the lower left scene is the third courthouse that was also located in the center of what would become Court Square. It served Covington County for seventeen years until it was destroyed by fire.

A livery stable is pictured in the lower right corner of the mural. Its location was where the current O'Neal Agency is located, beside the Clark Cinema on the downtown square. Robert C. O'Neal and Bond O'Neal, owners, are those among the group in front of the stable.

Pictured in the center of the mural is the current courthouse. Construction began in 1916. The scene in the upper right shows (left to right) Miss Ruth Howell, Miss Thelma Chapman, and Miss Lois Chapman, relaxing on the lawn in front of the courthouse. 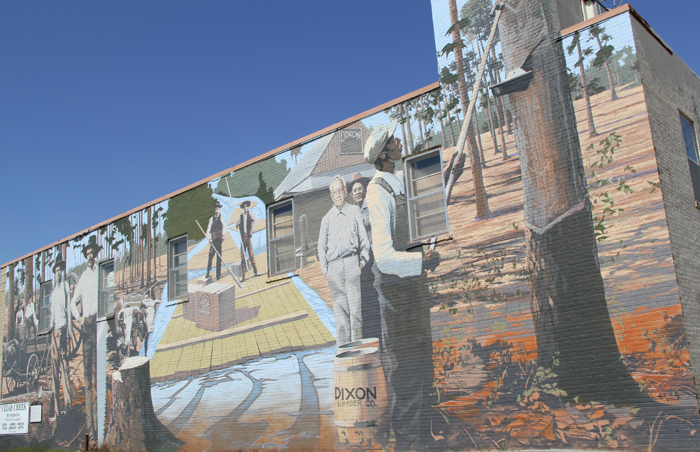 This mural is located on the Cedar Creek Realty building, located on Church Street.

The timber industry is equaled only by agriculture in its contribution to its early growth of Covington County. Though this mural gives the names of three: Henderson, Horseshoe, and Dixon, there were many other timber companies. The illustrations depict some operations of the early industry.

On the right of the mural, two men are seen beside a large saw that was used, along with sharp axes, to fell the timber. In the background is a logging cart pulled by a team of oxen, used to drag the logs from the woods to the sawmill where they were squared and made into rafts to be floated down the Conecuh River, during the fall rains when the river was full. This was the primary method used to transport logs and lumber until the arrival of the railroads.

In the background on the right side is commissary, a store maintained by the owners for the convenience of mill workers. The two gentlemen in front of the commissary are Solon and Charles Dixon. On the far right two workers are shown extracting turpentine rosin from a pine tree, the long-leaf pine being one of the main sources of this product.

Henderson Lumber Company had two mills located in Sanford that were first owned by Mr. J.D. Henderson and a Mr. Flowers and a Mr. Garrett. Others who had a later interest in the mill were Mr. W.W. Vorn and George Orkney Waits. The mills located at Sanford could produce 150,000 feet of lumber each day. These mills depended on log trains for transport. They followed the swamps along Yellow River and Five Runs to bring timber to the mill. As did most of the large mills of that day it worked convicts.

The Horseshoe Lumber Company, organized in 1898 By E.L. More was located on the banks of the Conecuh River at the horseshoe bend just east of the town of River Falls. More had a company doctor and clinic, and he set up a trust fund to benefit his longtime employees. The first mill at this location was burned in 1907. The second one was destroyed by fire in 1925, while the third one was washed away by the flood of March 14, 1929. At one time it required the services of some seven to nine hundred men to supply the 100,000 feet a day produced by the Horseshoe Mills.

Napoleon B. Dixon began sawmill operations on Blue Creek in the 1880's. He was the first to use conservation measures when cutting the timber. Like their father, Dixon's sons Charles and Solon continued in timber as well as the turpentine business. Around 1940 they built a sawmill complete with a chipper and a planer. They continued to add to it and improve it until it was the largest and most modern mill in the area. Dixon Plywood, a division of Dixon Lumber Company was founded in 1970 and located in River Falls. In 1972 it had a payroll in excess of $1,700,000.

Many communities of this area owed their existence to this giant industry. Lockhart, located about a mile west of Florala on Highway 55, came into being as a lumber town in 1891, when Jackson Lumber Company was incorporated to develop timber holding in Covington County. In the early 1900's the company was the largest producer of Long Leaf Yellow Pine Rift in the world. This lumber, manufactured by special machinery was considered superior. Many of the most notable buildings in Washington as well as New York and other areas had flooring made from Dixie Rift Flooring. Two of those buildings were the Library of Congress and the Grand Central Station. IN 1912, the mill employed around a thousand workers and was the largest lumber mill in the United States.

Falco was another town spawned by a sawmill. Falco Sawmill and Planer Mill operated until they were totally destroyed by a tragic fire in 1924. Other companies were the Empire Lumber Company, Florala Sawmill Company, Simmons and Wilder that later sold to E.J. Hodge and Weant Lumber Company who sold to Henry Merrill and later Cook and McGowin operated the mill. 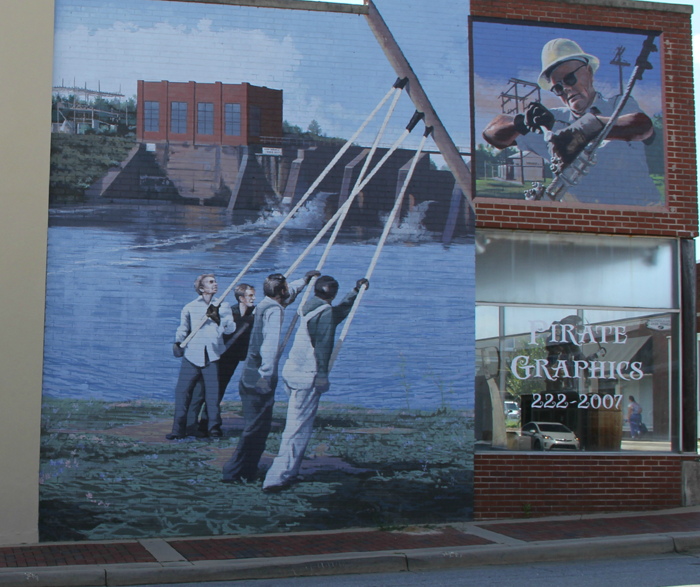 This mural is located on the Pirate Graphics building, located on East Three Notch Street. 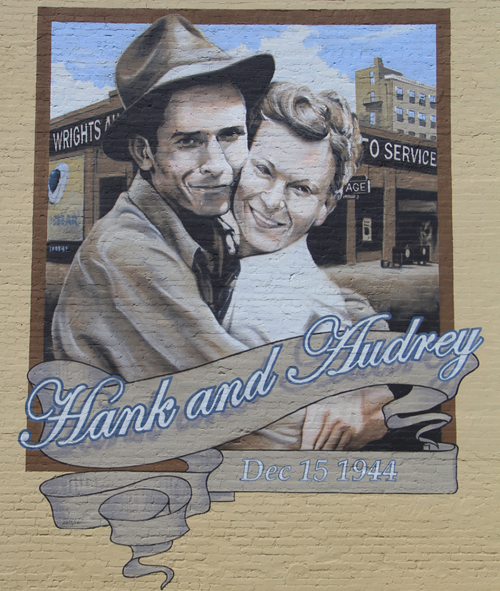 Many people attribute the beginning of Country Music to Hank Williams. Not only was he a gifted singer, he has written a great number of songs. He would sell songbooks of songs that he had written at his club appearances. His fame was so enduring that he is still considered the model for countless singers and songwriters.

Williams steel guitar player, Don Helms lived in Andalusia in 1944. Hank would spend the weekend with him when he was performing at the Riverside Inn on the east bank of the Conecuh River near River Falls with his Drifting Cowboys band. Another Covington County resident Robert Kyle, Sr. of Opp, played on occasion in Hank's backup band. Kyle's connection with Hank was through Jimmy Porter, who at age 13 became the youngest member of Hank's Drifting Cowboys band.

Hank was 19 years old in 1943 when he began dating Audrey Sheppard. Audrey played stand-up bass in the band and began acting as manager. She was separated from her husband. Ten days after her divorce was final she and Hank were married by M.A. Boyett, Justice of the Peace at an automotive garage owned by John G. Wright, Sr. located on this site.

Hank played at several other places in Andalusia and Covington County. For example, he performed in a concert on the football field of Andalusia High School, he would set up across from the Alatex in his early days and play for people coming out of the plant.

The Legend of Andalusia

The Legend of Andalusia

This mural is based on the legend told in a book written by James M. Prestwood, as related to him by his grandfather, James Austin Prestwood, who was generally known as "Uncle Aus". "Uncle Aus" is depicted sitting underneath a tree in the first scene of the mural.

According to the legend, Aus Prestwood came to Andalusia at the age of seventeen and had paused to rest underneath a tree. While there he met an elderly man who introduced himself as John McIntosh, part Creek Indian and related to Chief William McIntosh. McIntosh told Aus a story about the tree under which he was resting. The story began in November 1813 when a small party of Creek warriors captured a Spanish soldier who apparently had strayed from this group. They young Creeks were fascinated with the soldier's white stallion. They wanted to know the name and origin of the horse. The soldier carved the name of the horse "Destinado" and "Andalusia" a province in Spain where the horse was born, on the tree. The soldier, thinking he might be killed, told the Creeks he was taking the horse as a gift to their chief, Red Eagle. This pleased the Creeks and by dawn, they were in route present the horse to their chief. It was decided that Red Eagle would ride Destinado, acknowledged to be their fastest horse, in the battle at Horseshoe Bend. If the battle did not go well, he would escape on Destinado to rally help for the battle. He is shown riding Destinado and leaping into the Alabama River to go for help. 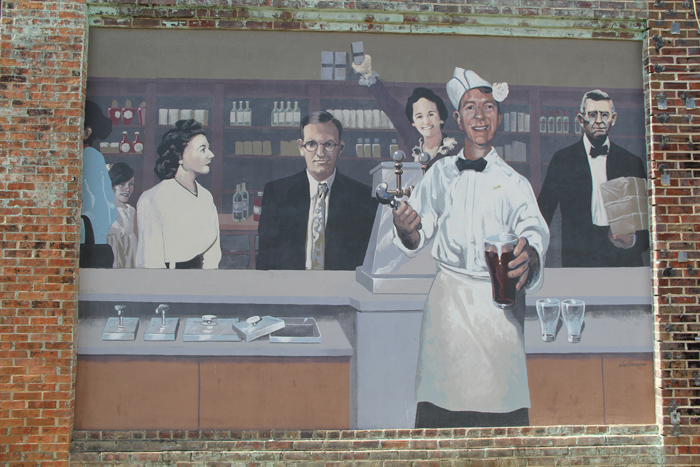 Riley's Drug Store opened at this location in 1908; however, the Soda Fountain opened on December 18, 1924. They advertised that the best fruits, syrups, chocolates and Kratzer's ice cream would be served. It featured a frigid air system built into the fountain itself that cooled the ice cream without ice. It was the first installed in Alabama. Included in the picture is Vera T. Anderson, who worked at the Soda Fountain, and a customer, Solomon Tisdale.